I appreciate that the BBC and Joanna Quinn had published this basically free for the British public. Congratulations on her nomination at the Oscars. The expressions, composition, framing and stylisation are examplar. The comedic view of her family life, her dilemma with being an ageing artist, and “hyper-realism” are all interesting things to take note of.

Here is the link to the full 16 minute animation: https://www.bbc.co.uk/iplayer/episode/m0015zp7/affairs-of-the-art


This is the final animation, I’ve decided to go with the one with the grain. Mostly because its good with consistency and realistic effect of cameras. If I were to have more time for example a year I would be able to make more complicated movements and possibly even speech, although I want the main character not to be to speak like my previous character concept for my game in the second year.

I used After Effects and Photoshop only. I do believe it could’ve been better to use Flash, its more easier to create flow of movement with frame by frame sketches. Although after effects really simplifies it for us. I would want to spend more time making the video scenes more fluid, with ease and flow. Some scenes do really compliment each other well, I feel the bedroom scene at the beginning and the shower scene works well but the computer to bus scene is a little rough. Viewers might not fully understand it. Originally the very first animatic was about the oblivious character about the beauty of the world. However Mark did say something along the lines that I was, “trying to make two animations”. Which I had to revise the idea to a loop of the daily apathetic life of this character. A symbolic character reflecting the nature of my generation in the 21st century.

The character design and the background was rather difficult to decide. At first I wanted everything to be painted, but as I started to make the scenes I realised that it was a bit too ambiguous to make 2 minutes worth of city scenes in 3 months. Along side the work of two other modules. 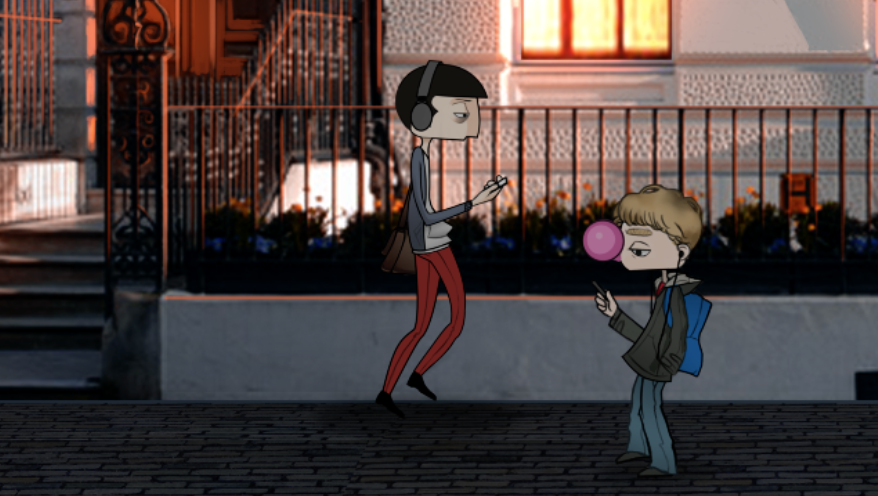 So I added a “kid” character with the bubble gum animation and I have to say, it works well. I was scared it would be too complex and technical for me to understand. However it actually helped me understand After Effects even more, I learnt a lot. Especially the mode column which seemed to be missing for nearly 4 months of using it. Well, I also loss 1-2 years worth of bookmarks, themes, and extensions on google chrome. I guess that’s what happens when you sync your account after months and months of not doing it. The reason why I spent my valuable time making this “background” character is to make the scene more realistic and believable as a place. 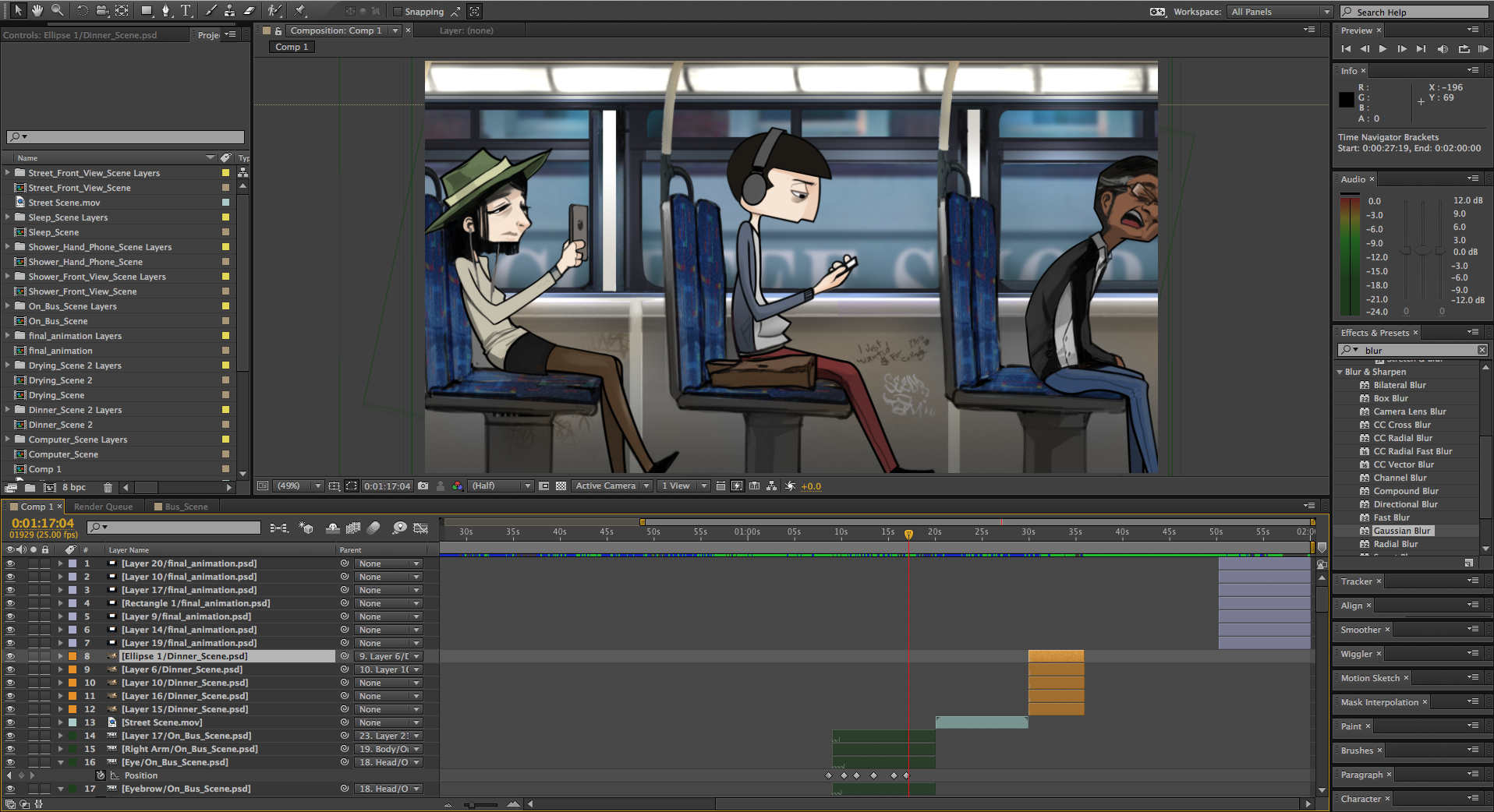 A few fixes and finalising to a point I can actually had it in. Obviously I haven’t really proof checked the timing and the animation speed too much, however I think this is now possibly able to hand in. There are few things I need to update or change in the animation, the eyes in the bedroom opening and ending scene needs to be fixed to the rest of the animation to create consistency. There are few animations too I looked up I could implicate to the animation, the bubble popping animation is probably a nice little add on for a background character, maybe a child. The walking animation really is there just so I remember the good points of animating. The line pen tool animation is there so I can make a good “chewing” animation for the breakfast and dinner scenes.


These are little things I need to fix with photoshop or after effects. There are the movements of hair, the nape of the neck, movement of coffee with body, the bin being a flat print on wall, the weird gap on the end of the bed and bottom eye lid. 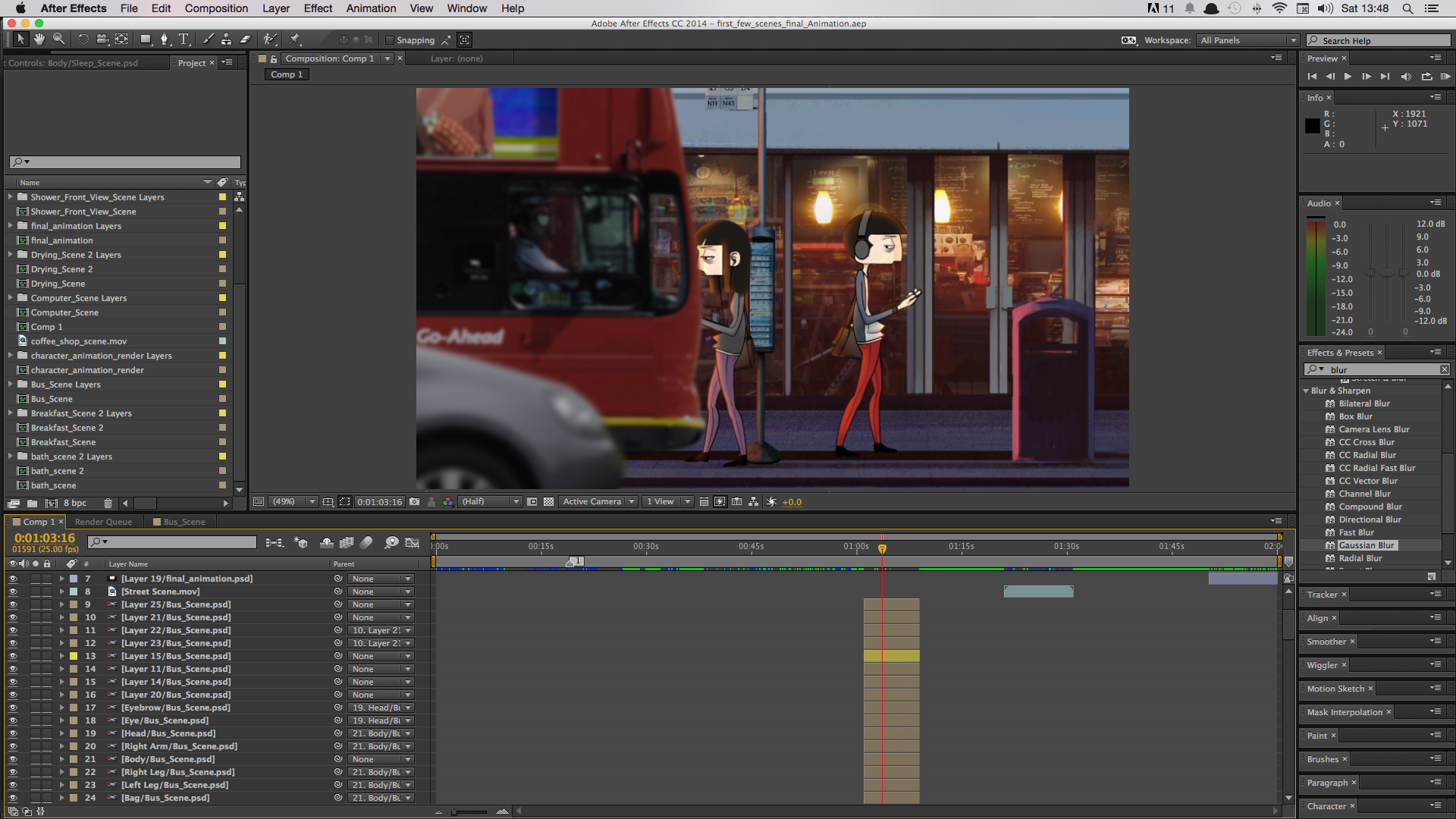 Really coming together with the animation. However the flow needs to be better, there are problems with honesty and understanding. What is the message? Why is he doing that? I need to make it more clear. Possibly make more interesting animations to this scene shown above. There is a short animation called Home Sweet Home which is around 10 minutes long but it’s very touching and interesting concept. I found it from a facebook page I follow where they went to a FMX conference I believe. 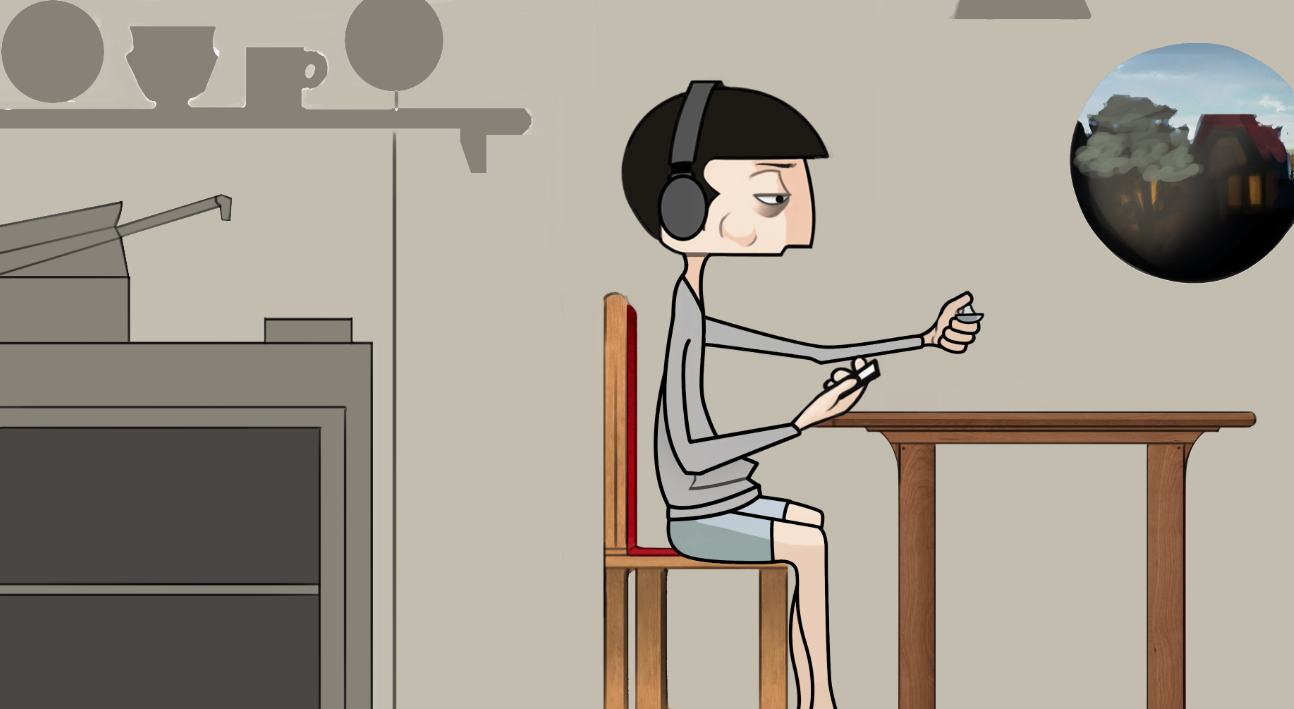 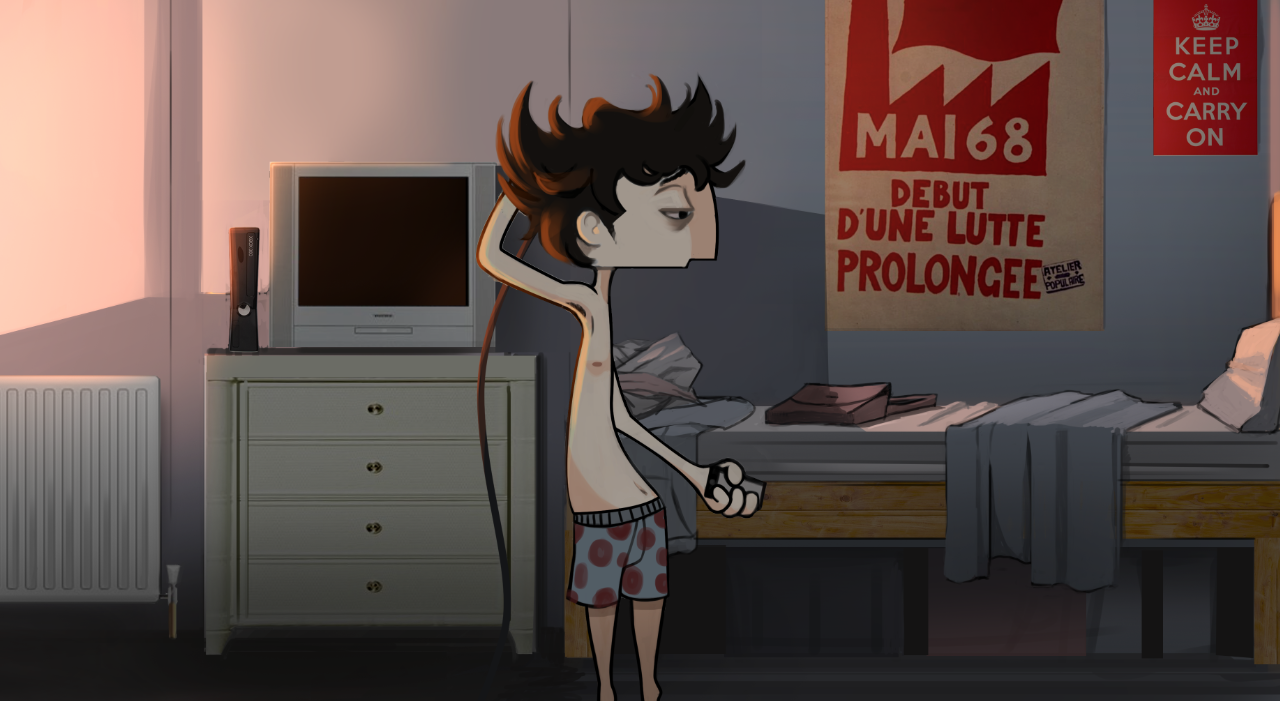 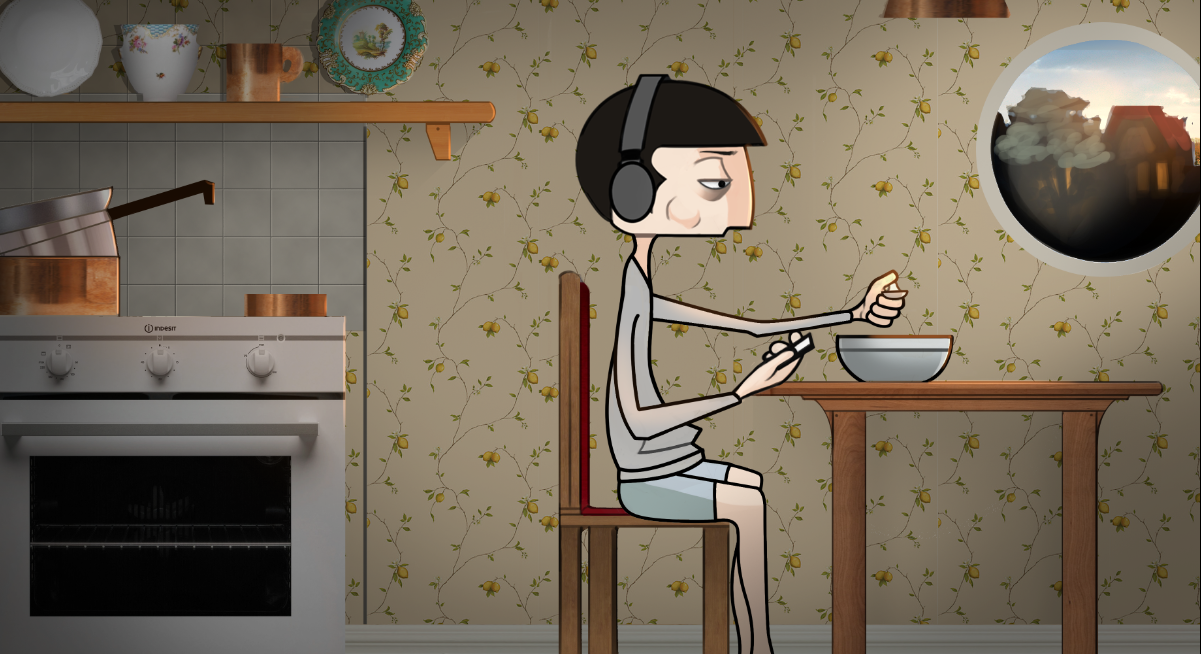 I decided its time to finish it off, a marathon of animation. I’ve pretty much did it all. The only thing that concerns me is time and the effort I show, the sleeping bed scene at the beginning might be a little harder than I thought to make. Although I’m pretty sure I can do it. I know I can. EDIT: Now I’ve pretty much done half of the whole animation. The other half is actually copies of the previous half but with different clothes, scenes and lightings. So I should make it look really good when I polish it. 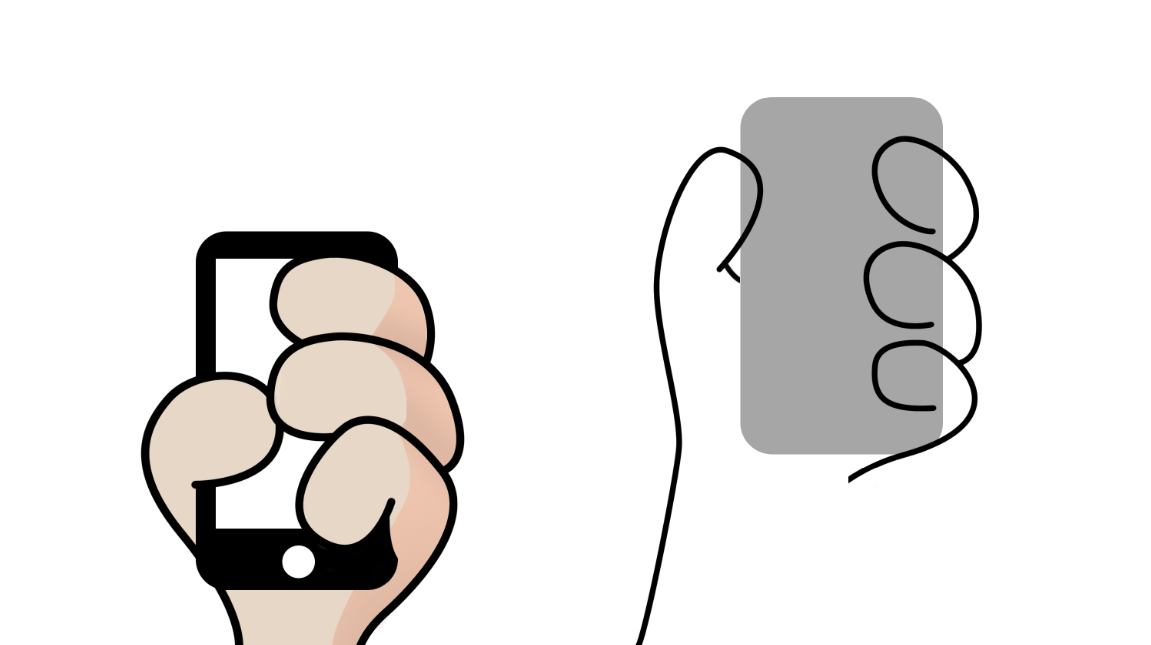 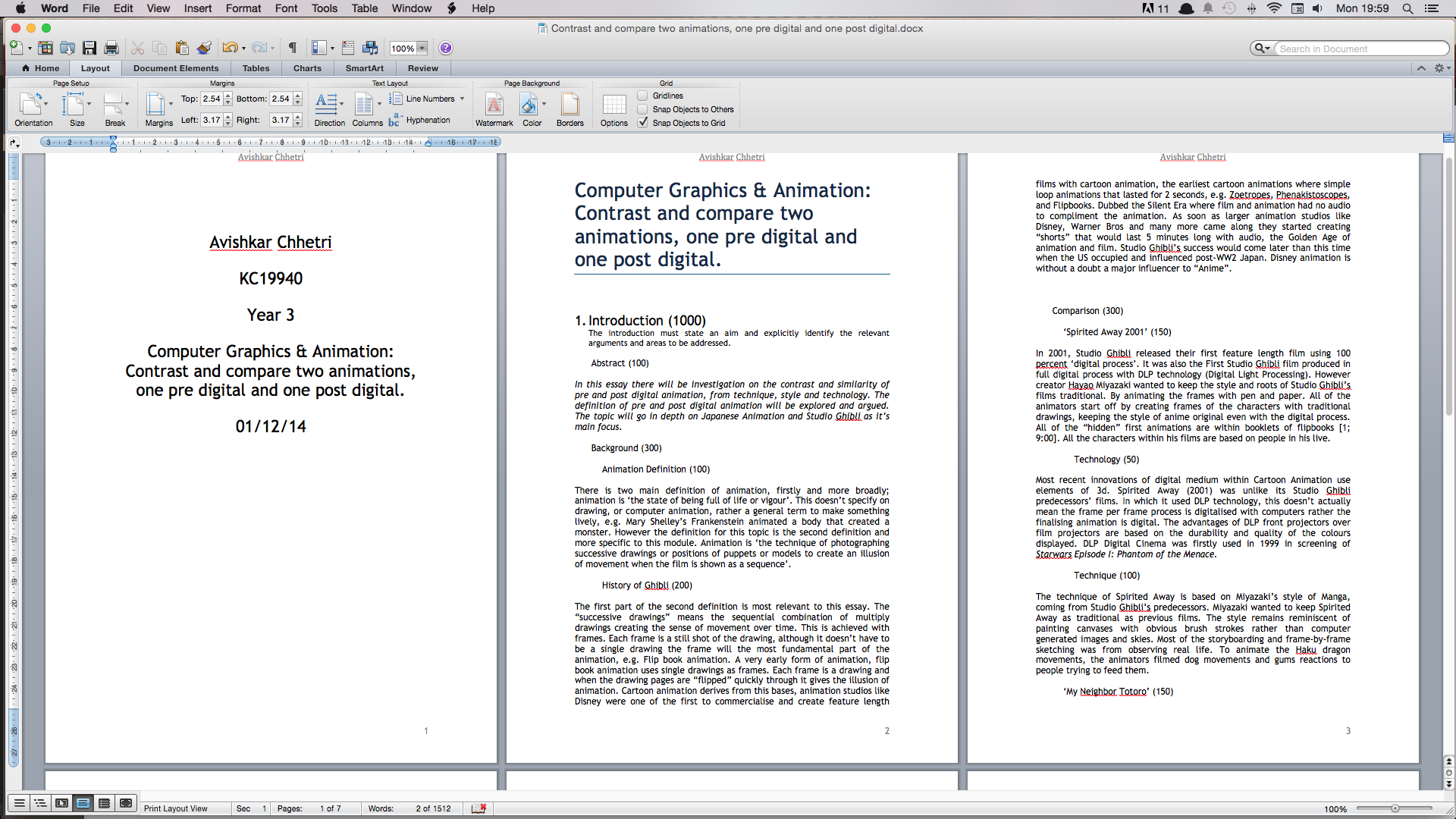 I’m finding the essay more fun than I thought I would. I actually like writting, who knew? Well the animation is slowly getting their, it is tiresome and long, but I think I’ll be completing it soon. I just need to finish off the backgrounds. With the essay, I’m finding it hard to make most of two animation films, My Neighbor Totoro and Spirited Away. I found lots of references and sources even though Miyazaki is a rather secretive man. He doesn’t like to give away his process too much.

Great insight for my essay which will be on Studio Ghibli and Japanese Animation. I think it’s really interesting that they stood by their traditional technique of flipbook drawings. They didn’t waver to newer computer animation tablet drawings.