Why is this my most liked, viewed, downloaded and commented piece of art on dA (DeviantART) and online? With 4,625 views, 135 likes, 199 comments and 1,679 downloads, “That Girl” is an odd moment in my art career where people actually participated and took a deeper notice on my art.

I recall drawing this during a time of GCSE stress, family disputes, emotional upheaval and a sense of lack of control in my life. I was 16, with emo hair, listening to Nu-Metal all day with my bulky headphones and drawing with my graphite pencils of hyperrealism portraits. I drew, “That Girl” from one of my mother’s many Vogue fashion magazines, interested in trying to capture the feminine beauty of a model. I never intended to show this to the world nor expect it to become the most popular image on the Internet by me.

But what makes “That Girl” so popular is behind the scene. During this time, dA was at its height. The popularity of the art-sharing website was known as a front runner of the Internet’s few social forums, including MySpace, Facebook, Twitter and Youtube. My brother introduced me to dA and the many Manga/Anime enthusiastic users within. Within moments of uploading your “moderately okay” looking images, you would get a least 1 or 2 likes and 10 views. Which is not the case anymore in 2020. Other art-sharing sites like Instagram, Twitter, ArtStation, etc, are more used to publicise your work. But something very personal was at play, I was young and self-confident at my ability to gain popularity and fame as a “drawer” (I used to call myself “drawer” or “graphics artist” (I clearly didn’t understand what the term meant)). I spent hours communicating, sharing other people’s art, contributing to forums and groups, and most importantly asking people to view my art. Taking personal professionalism of placing my signature on the image, dating it.

In the 10 years since “That Girl”, I have drawn thousands of illustrations and concepts to get a “following”, but to no avail, I never got to the point of popularity of this image on dA. I lost a lot of confidence and had gone through cyclical periods of loneliness, depression and anxiety which still persists today. I lost a sense of self-pride and passion trying to gain people’s response by asking for it. In the 2010s, I philosophise my career with a sentence of, “if I work hard and practice every day, I will become better and people will naturally take notice of my art”. But they never really did.

The reality is that to understand popularity of artists like Loish, ArtGerm, SakimiChan and others, is to know that they worked both consistently, professionally and marketed themselves to a specific goal. I didn’t try to attend conferences, art contests and communicate with art forums regularly. I never proactively tailored my art to a studio to gain an entry point as an artist. I was drawing every topic, every theme without direction.

The next biggest image popularity is of “Elemental HERO Necryra” drawn 3 years later in 2013, with similar 4,437 views, 65 favourites, 27 comments and 31 downloads. But the reality is that it was never an immediate success as “That Girl”. I believe this has a different reason, this was not something I proactively promoted. But it gained popularity I believe from the newly introduced hashtagings and good “searchability” of Yugioh. Fanart is one of the best ways of getting yourself out there.

You can never really tell what illustration will make you famous, or give you money. The truth I believe in is that you have to proactively work towards a specific goal and holistically aim yourself towards it. Participate in things, talk to people and gain respect from job creators. 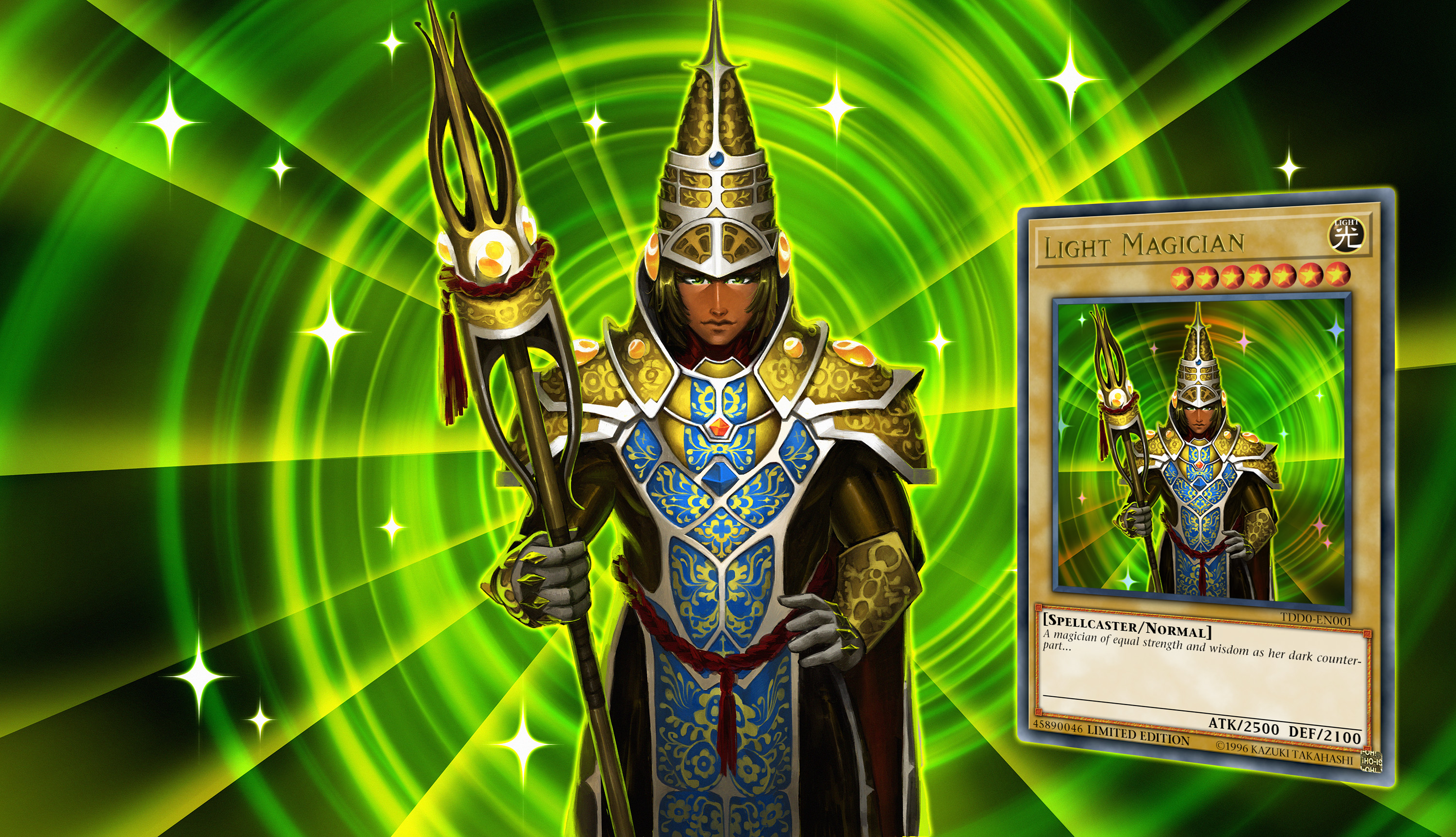 This was a quick try to stay productive. I completed this image and the Battak Duck image to stay productive at a time when Brian didn’t really contact me for a month. I was surprised that the response has been very low. It might be because the /r/yugioh fandom has a very specific idea of Dark Magician and quality of art from the Konami artists. The time of publication was around midday, which is never good. It’s important that I publish at the appropriate times.
– Time consuming
– Low quality art (greyscale sketch, to low res art to refined and experimental digital portrait)
+ Great background, making an interesting background with numerous elements seems to be good, it’s flawless in its design and execution.
+ Playful for my production, I enjoyed it for the most part 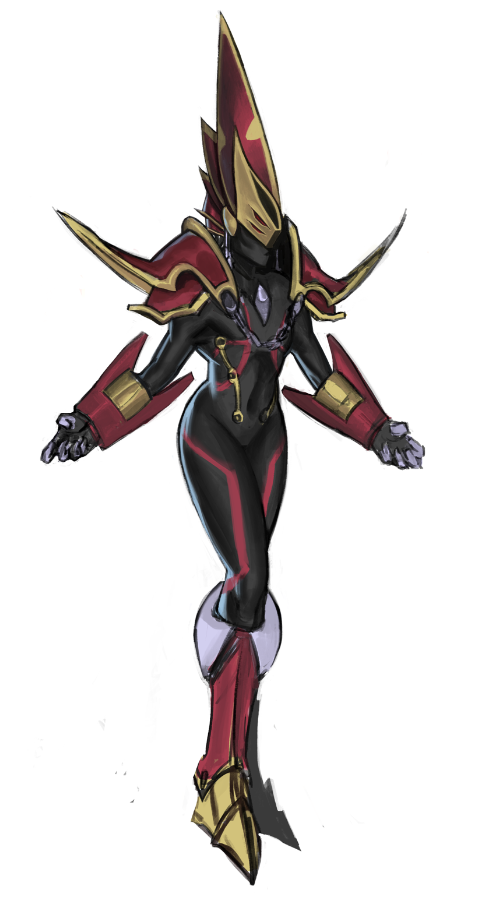 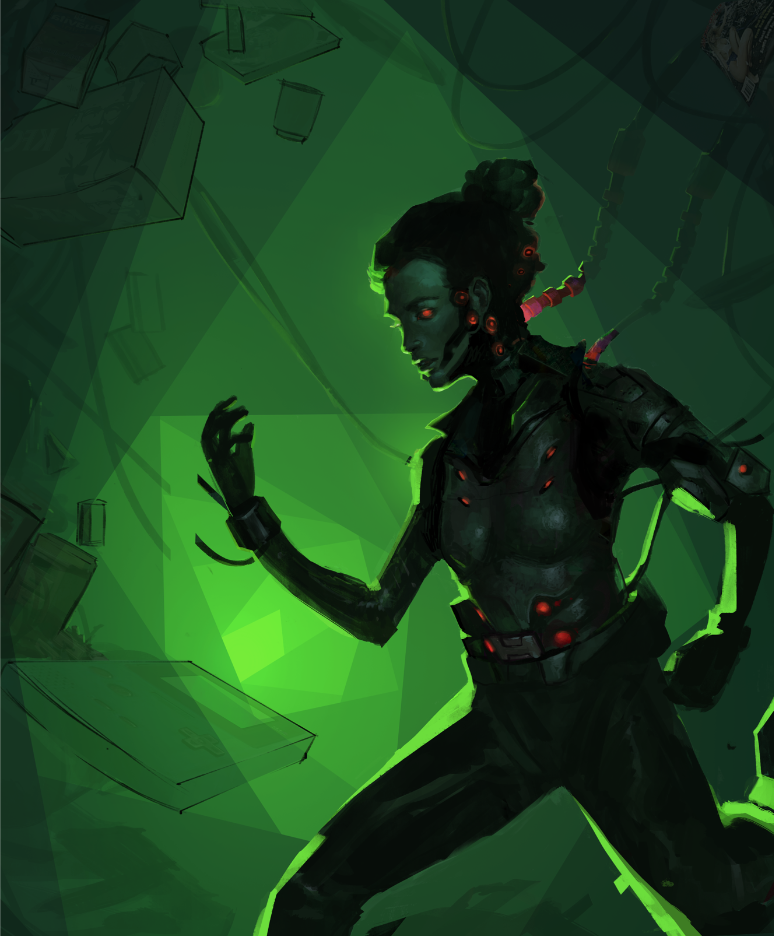 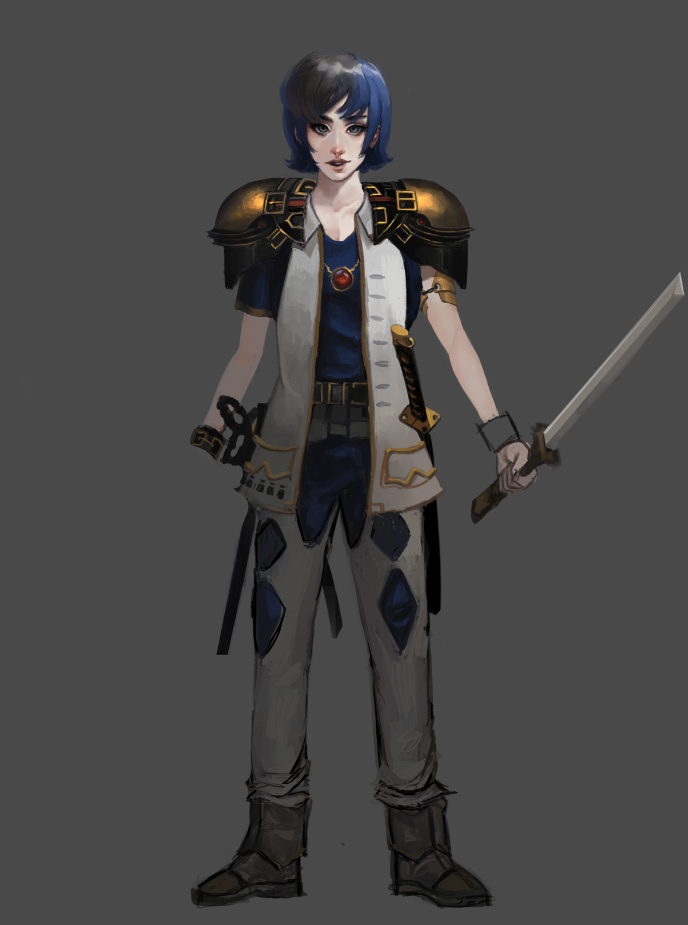 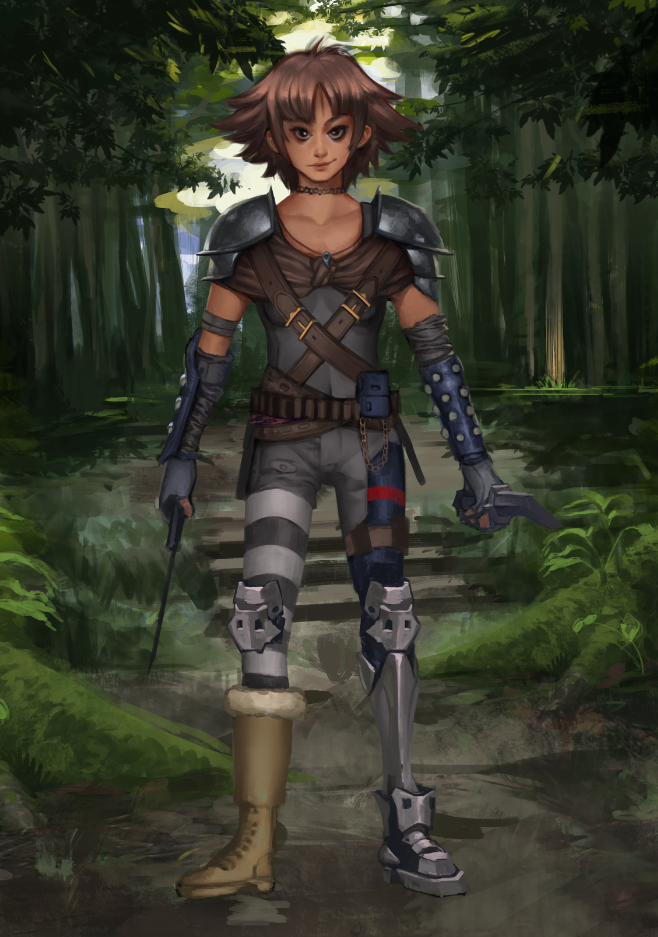 Here are some incomplete work. They are all heroines based on previous work, except for the second one from the left.

Watched the adaptation of Marjane Satrapi’s autobiography comic book today, it was, in my opinion, not about the revolution of Iran nor the Iraqi-Iranian War as much it was the specific coming-of-age of Marjane. At times it felt a clear extraction of an individual’s life. The specificity is something I aspire to reveal in storytelling, such as Marjane’s clear characteristics not serving a major plot device or progressor, such as her messiah/prophet complex as a child – it can be said that all these amount to her rebellious nature as an individual in a repressive regime, but I believe the feeling of being rebellious was more blunt from the punk impressions or Western-cultural influences on Marjane.

From the first 20 minutes of the film, the pacing and transitions of shots were jarring. I hope the filmmakers didn’t create a linear production from the start to the end. It could’ve been that way, as it felt like that. There is also a lot of comic-like images that don’t really play well in animation/film. I feel the family’s contemplation of the future of the country after the Shah’s defeat as being rather too fast and inconsistent to the protagonist narrative of Marjane. Why couldn’t it be portrayed from only Marjane’s point of view?

I really enjoyed the return to Iran montage (Eye of the Tiger), I imagine the feeling of being clinically depressed and overcoming the feeling would’ve been longer, darker and depressing to watch, ironically. But the conveyance of Marjane’s old nature of enjoying Western films and music returning to her was uplifting and reassuring that she will change people around her in this exhausted nation.

At the time of my unveiling of my final grades from my BA in Digital Arts in UWL (Kingston College), I retorted with my grade results as a product of an averaging out of a bell-curve. As in, my 1:1 grade was only achieved because most of my class mates achieved levels lower than me, making my work jump to the upper threshold. I couldn’t have earned it. I was a natural loser, a person of underachievement. Throughout my youth, I did poorly in almost all my subjects, only scoring average. I came to settle in the idea of me being a low achiever. Although I was a good technical life drawer or a copy-and-tracer drawer, I came to find myself looking to the creative arts as a place of comfort for my imposter syndrome. Imposter syndrome has connections to an external locus of control, the belief that we cannot change external events or actions outside of ourselves. Whenever a barista or a waiter would get my order wrong I would find myself relinquishing a right to complain, or feel bad because I don’t have the right to say something, or I cannot change how people feel about me. I believe this is a universal feeling, a feeling of paranoia of the inability of melding people’s perception of you and your work. Over the course of a year doing my MA, I found a deeper lesion in my personality of being overwhelmed by attention and group-interaction. I could go on why I am phobic of gangs, clicks, and groups, but I’ll skip over that for now. But this overwhelming feeling of judgement, paranoia and a sense of not-belonging (being an underachiever) I relinquished my right to improve the situation or sell a better image of myself. Thus my fears of being left out and seen as an underachiever became true. For example, in my time as a ALS (Additional Learning Supporter) in a FE college, some students although attending a year long course in English, would refuse to attend the examination. They didn’t want to go through the feeling of being an underachiever and thus reinforced by not getting a resolve.

Artists and art are in my opinion one of the most personal expressions of individuality possible. Other than sexuality, protest, hatred, etc. To create art is to “put-yourself-out-there”. For me, I draw a lot of inspiration and creative energy from positivity and encouragement. When negative emotions, be it self-doubt or self-hatred, I find myself in a runt. Pain and misery are the hardest things to convey in art without causing the audience to look away, I’ll say most so than comedy and humour.

But I’ll finish by saying this, every once in a while remind yourself that you are you, you are good and you can always have the possibility of being good and you most of all must remind others of this.

“Epileptic by David B”

“Paying For It by Chester Brown”

“The Production of Everyday Life” by Henri Lefebvre

The Works of Stephen Willat. Isabel suggested this graphic novel artist, that uses a peel-away feel to his illustrations. Similar to my attempts to clean and define shapes in pastels. 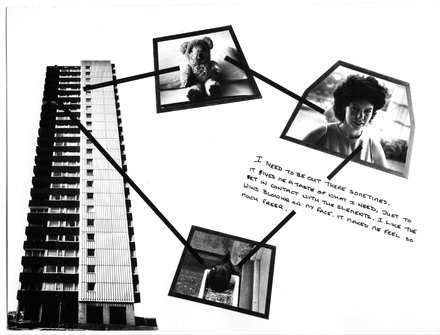 Birgitta finds a counter version of my and Ballard’s critical review of high rises. She mentions Antonioni estate blocks. A filmmaker. She also mentions Cathy Come Home, a BBC documentary that apparently changed laws. It’s about the rural slums that predated the high rises. Created by Jeremy Sandford.

I appreciate the quote, “you can change the flat, but the flat can change you”.

There seems to be no positive feelings for flats according to these residents. They don’t like the sameness of the architecture, one lady mentioned “down to earth” feeling. Maybe “Down to Earth” could be the title of the film. They complaint about the isolation of these flats. That one lady doesn’t really know people from the 2nd top floor. Perhaps the elevation of flats from the ground has made “stay-home” mums have cabin-fever.